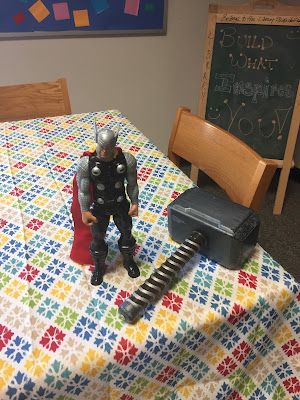 Today has been brought to you by Thor's hammer! You know when you have those impromptu discussions about pop-culture and it leads to brilliant debates and philosophical discussions by your students??? THAT happened to me today. In my Makerspace, I have a Thor and his hammer. I had it out as a coping mechanism for one of my autistic learners. Some of my male students saw it and began playing with it. Sadly, I didn't have my camera ready to go. I was in the "welcome to class" mode. Nevertheless, the arguement began on who can pick up Thor's hammer, all while they acted out trying to pick up the hammer. After watching them struggle on who could, I chimed in with Vision, as the current winner was Magneto. Being the best diplomat I could, I conceded that Magneto and Ultron could both pick up the hammer! I had to get started with class!!! While they worked, I did some  RESEARCH --after all, I AM A LIBRARIAN--as they walked out the door, I told them that
Post a Comment
Read more
More posts