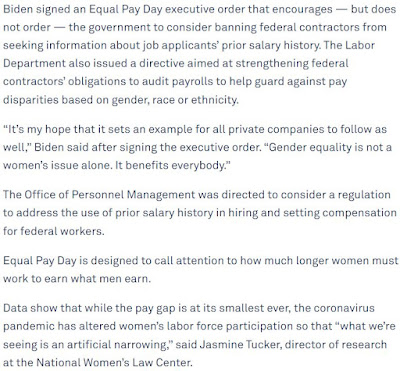 I appreciate the opportunity to share my thoughts on Women's month. I won't lie to you, growing up, I was a tomboy. I learned at an early age, men had the power and women served them. I began rocking that mentality immediately...a rebel with a legitimate cause. As a woman, I've enjoyed being such and loathed being such. I hate that women have to work 24/7. I work as the sole-provider of my family. I take off of work, when kids are sick. I work while sick. No work, no money. I grind harder than any man and make more sacrifices than most...just to make 80 cents on the dollar compared to a man, who does less work...has a society that caters to HIS needs...and very rarely has to be in the position to lose pay because he chose his kids over his job....and I'm Black (which is it's own win and woe in today's times). Therefore, the acknowledgement from our President that there must be equity, equality and an END the gender paygap , I felt a little more SEEN and HEARD
Post a Comment
Read more
More posts