August 09, 2017
I LOVE, love, LoVe virtual conferences! Any day I can learn in my PJs is the BEST learning for me. It's made me productive enough to do a summer post!

In conjunction with my role as a Coretta Scott King blogger for ALA, I will focus my post on the wonderful Jason Reynolds and how his book, Miles Morales: Spider-Man has hooked reluctant readers! Please enjoy!

I hate to be snitch, but it’s all Jason Reynolds’ fault...kinda. His words created such a believable connection that the new Spider-Man is a half black, half Puerto Rican 16 y/o from Brooklyn. I half expected Zendaya (from the summer blockbuster Spider-Man Homecoming) to step out of the book! 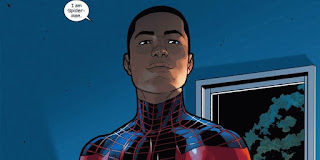 According to recent studies, young men and women read less than 12 minutes per day. I know. Stifle the tragic screams of your inner librarian and do NOT worry. With great reading power, comes great responsibility. Jason has answered the call as the new and diverse “Uncle Ben” from the Spider-Man series!

One reason why Miles Morales/Jason Reynolds connects with reluctant readers is because of the character’s voice. “I tried to create someone you want to hang-out with, not someone stagnant or authoritative,” says Jason during the virtual conference. Without missing a beat, he continued that “words need to feel real to the kids. The language must be contemporary. Use their voice, as it’s vital. That’s the magic for reluctant readers.”

In fact, after listening to him, I must say that he has so much #blackboymagic exuding throughout his graphic novel, that he can turn reluctant readers into avid readers! I'm not saying he’s biblical, but he gets RRs. Trust me, I’m a librarian.

No one  else could take Marvel’s best known superhero, give him a 2.0 upgrade in cultural relevancy and soften the transformation with enough depth to make an otherwise adverse adolescent wonder, “Hey, this guy sounds like me!”

The keepsake moment arrived when Jason answered the question, what questions do you want asked about Miles Morales? He took the traditional stance of “I want kids to notice the new things that have arrived now that Spider-Man is of a different culture. Notice how he behaves when he takes the mask off. Pay attention to the layers and cultural perspectives of the book.”

However, I believe the best quote from Jason was his nod to a truth that has withheld the test of time: “Comic books have always addressed the tougher discussions of society. I want questions/discussions to stem from that.”

After all, as an avid comic book hero fan, I can attest that (1) Captain America was created as a force against Nazi Germany; (2) Wonder Woman birthed a renaissance in feminism; and (3) Superman tackled corporate greed vs the little man, as well as refugee plights--Superman is an immigrant from Krypton!

Therefore, why not entice those “reluctant readers” with a likeable hero, who looks like them, speaks with a slang they’re familiar with and they can discuss the issues the hero faces with their friends?

In a world cloudy with websites, wouldn’t it be ultimate and amazing to have Miles Morales: Spider-Man coming home with your son blabbering away about some cause he wants to tackle in order to change the world? *Only a true nerd will end their post by referencing all of the Spider-Man series!*