February 16, 2018
Today is a BIG day in my realm of living. It's the release of the much anticipated #BlackPantherMovie! I love the comic series written by Christopher Priest. I love the actors. I love the reflection of faces like mine. It's a cultural game changer for every black kid/kid-at-heart. Period.
Therefore, I could not let today pass without acknowledging it's significance. The whole concept of Black Panther is based on AFROFUTURISM.
According to Jaime Broadnax, "Afrofuturism is the reimagining of a future filled with arts, science and technology seen through a black lens. The term was conceived a quarter-century ago by white author Mark Dery in his essay “Black to the Future,” which looks at speculative fiction within the African diaspora. The essay rests on a series of interviews with black content creators. There's an in-depth analysis here. Or you can see this wonderful interview with the Costume Designer from Black Panther, Ruth E. Carter.

Taking that definition to heart and in honor of #WakandaDay, cheers to my newfound-identity: WAKANDA LIBRARIAN!! 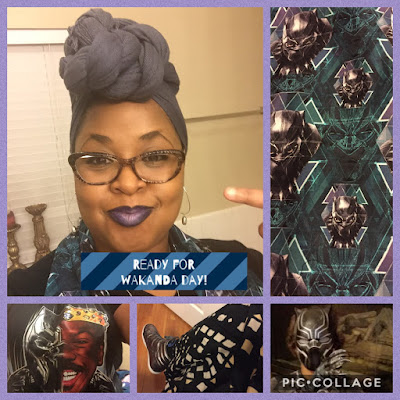 1. Black Heritage on display in the heart of the Motherland.
We get to see Africa in a wondrous way, separate from apartheid, famine and 3rd world suffering. Here's a much needed reflection from Lupita Nyong’o and Danai Gurira, actresses from #BlackPanther, and featured Queens of Gal-Dem's article on "Black Panther AND RE-IMAGINING AFRICA: AN INTERVIEW WITH LUPITA AND DANAI".

One of the most powerful aspects of Black Panther is how it’s reshaping the representation of African countries. We talked about the importance of Wakanda and as Danai put it, “the idea that we never got to see the uncolonised Africa, we don’t know what we could’ve been without the intrusion and the assault of colonisation.” The notion of a land like Wakanda is so impactful because it illustrates a parallel universe, showing an African nation that was never colonised, and allowed to flourish into something wonderful and powerful without intrusion. She went on to explain, “what if we took command of our resources instead of letting the west and the east leech them out?”

For the longest time and as a child, Black Panther was one of few black superheroes to me. There wasn't a female black superheroine for me to look up to so I idolize Black Panther, Black Lightning and Luke Cage. But seeing, Dora Milaje on screen...gave my heart a glee that's never been felt before! Finally, the world can see US-WOMEN as heroic and unstoppable too! 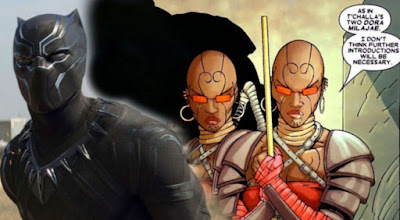 Here's Chadwick Boseman sharing these feelings in the heart of every black kid in love with comic book superheroes: 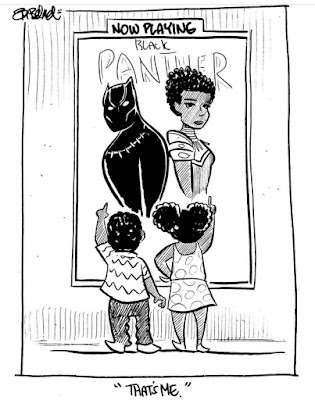 I've said it on my blog before about diversity and why representation matters. Lee & Low, one of the biggest publishing houses on respresentation wrote an extensive article about it. Here's what the director of Black Panther, Ryan Coogler has to say:

Representation and identity are a core component of Afrofuturism. Fittingly, director Ryan Coogler and his co-writer Joe Robert Cole make that the root of Black Panther. The film centers on T'Challa (Chadwick Boseman), the newly crowned king of Wakanda, who takes up the superhero mantle. To the rest of the globe, it looks like a third-world nation. But secretly, Wakanda is incredibly advanced, thanks to its reserves of vibranium, the superstrong metal that Captain America's iconic shield is made out of. When last we saw T'Challa, in Captain America: Civil War, he was a son seeking revenge for the death of his father. (It's a long story.) But in this film, he's trying to determine what kind of king he wants to be. Excerpt from Engadget.

4. Unheard of technology created by blacks.

The vision of Wakanda as a vibrant metropolis -- one that's more advanced than anything we've seen on Earth in the Marvel films -- is enough to inspire hope in audiences. It's almost too much to take in at first: there are high-speed monorails, flying ships and gorgeous skyscrapers amid bold colors, fabrics and patterns that make the city distinctly African. And almost instantly upon seeing Wakanda, comes the realization that it's unlike anything we've ever had in a big-budget Hollywood film. How often are African societies shown to be advanced? Let alone more so than the rest of the world. (Who needs Tony Stark when you have Shuri, the Wakandan princess who's also responsible for most of the country's high-tech innovations.) Excerpt from Engadget.

5. Hope that equality will prevail.

This movie speaks to the humanity in all of us. In my opinion, it's leveled the playing field. There's no more tokenizing of our significance to the economy, culture and equality across the globe.

This is a movement, a long awaited validation and a beacon across the world from the descendents of Africans.

This movie has changed people and the concept of what it means to be black in the most positive of mindsets.

To all of the blerds, nerds and watchers of progress, this is our time! Listen to this interview with Letitia Wright, who plays T'Challa's sister, Shuri and genius nerd:

If you doubt this movie is in fact a movement, here are some of the comments from the social media campaign, #WhatBlackPantherMeansToMe.

#WhatBlackPantherMeansToMe being able to see a princess that LOOKS like me and is smart, strong, brave, pretty and silly like me. Can’t wait to share this movie with #FlintKids #blackpanther #WakandaForever pic.twitter.com/q1v3setVOH
— Mari Copeny (@LittleMissFlint) February 16, 2018


If you want to see my response, then by all means, here you go.
And...just in case I haven't supplied enough resources for you, here's a website dedicated to the instructional resources for teaching Black Panther via Black Panther Challenge. Also, check out this video, survey and extra awesomeness for Black Panther and Black superheroes in general!